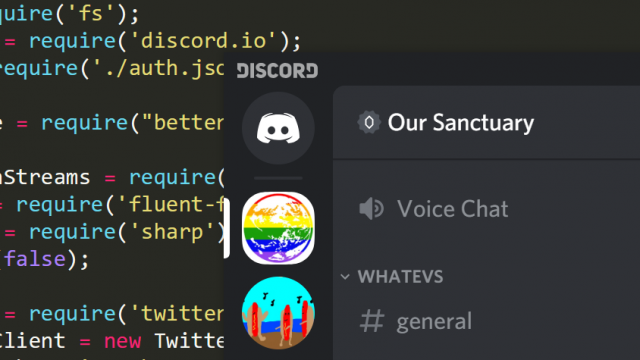 I like to mess around with bots for my social circle’s Discord server, so I’ll catalog them all here.

General Purpose
I have a general purpose bot called Sanctuary Bot that handles a handful of miscellaneous features that compliment the specific way we use our Discord.

GamesDoneQuick
As a huge fan of GamesDoneQuick, a speedrunning marathon raising money for charity, I wanted a way to inform a channel on Discord about upcoming runs. This bot (named Velocity after the event’s mascot) scrapes the schedule page and posts into the channel when the next game is within 15 minutes of starting. It also has an on-demand feature to post the current and upcoming games, as well as a reminder feature to be @-mentioned when a game is coming up next.

Webhooks (not actually “bot” scripting, but it’s Discord related so it’s included)
Discord provides the ability to set up webhooks that will auto-post in channels if you send a properly formed payload to a unique URL, so I took advantage of this to grant us the ability to share screenshots from console games directly through the console’s social media sharing features. It involves the following components:

The resulting flow: use the console’s social share feature to post to twitter, make sure you @-mention the Twitter account at the start so Twitter thinks it’s a reply and hides it from followers, insert a corresponding #hashtag to the channel you want to share to, and upload. Twitter events ping the script, the script passes it on to the appropriate webhook, Discord receives it and posts it.