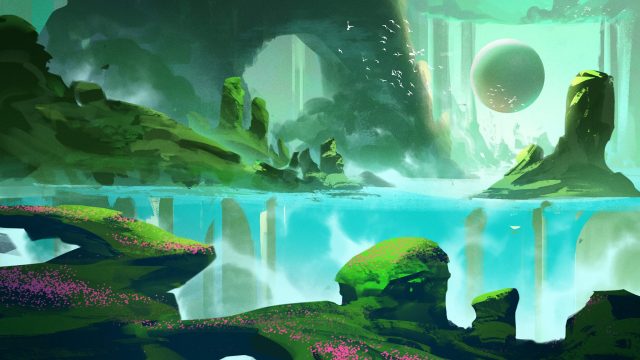 Fourside is a story-driven rogue-lite game about harnessing the power of unity across a widely diverse cast to heal the negative energy of the universe. You play as the last sentient robot long after the collapse of humanity’s golden age of expansion and colonization across space. You planet-hop through portals, fight monsters and gather resources in procedurally generated levels, recruit new people from long-lost civilizations, and repair and expand your home colony. By upgrading the colony and building social relationships with the new recruits, you get stronger and gain new abilities. Using the Portal Draw system while on the planets, you’re able to tune and tweak the procedural generation and effects of future levels within the same run to suit your needs, whether it be to find a resource that only appears in a specific biome or to boost your own stats before fighting a hard boss.

Humans discovered a vast web of ley-lines overlapping our space-time and learned to harness them as a transport network, instantly teleporting people across the galaxy to other planets. Soon after new colonies and societies were established on new planets, war began to break out over control of the portals. The final battle happened at the an off-planet research colony focused on studying the portals and ley-lines. This resulted in an event so catastrophic, it severed the network and shut down all portals across the entire system, stranding each human colony to live on their own.

Hundreds of years later, a robot wakes up and discovers it has the ability to use the deactivated portals. The robot then takes it upon itself to make contact with old human colonies in an attempt to figure out what happened and learn how the ley-line network can be restored.

Gameplay alternates between spending time upgrading and socializing in the colony and romping through the procedurally generated “dungeon”, where every floor is narratively a different area (or planet) you are randomly teleporting to.

While in the colony, the flow is similar to visiting a town in Harvest Moon or Stardew Valley. You socialize with the people you’ve recruited and get missions from them to increase your social bond. You can also expand the colony by building new structures and improving existing ones, doubling as the system for player progression as well. Expanding the colony increases the player’s stats, tying together thematic and mechanical progress.

While on the planets, you fight your way through hostile enemies and gather resources before locating another portal to either return you home or take you to a new planet. Your social bonds with the colonists manifest as abilities you can equip, completely changing the playstyle to your desire. For example, your bond with a chef manifests as a fireball you can throw, while your bond with a guard manifests as a shield you can use for protection. Each new recruit to the colony offers a new ability, making it exciting to search for them all and socialize with them to make them more powerful.

Combat prototyping before any of the rest of the game was in.

The Portal Draw system offers a twist on the procedurally generated rogue-lite gameplay in that it allows the player to modify the generation algorithm at the end of each floor. Before entering the exit portal, the player is presented with a set of randomly drawn cards that each boost the player’s stats and a set cards that each boost the difficulty of your enemies and environments. The player must pick one from each set, boosting themselves as well as the dungeon, slowly raising the stakes with each passing floor. For example, a mission calls for a flower that only appears in a forest biome, after 5 floors, and only if a certain flower-eating enemy isn’t also on the floor. You work your way through the floors and eventually get a card during Portal Draw that sends you to a forest biome. You fight your way through some more floors and see a card that removes the flower-eating enemy but greatly increases the stats of the rest of the enemies. You finally make it to the 6th floor and can now hunt for the flower you need for the mission, being extra careful not to get destroyed by the boosted enemies. Once you find the flower, you run to the portal at the end of the floor and teleport home. The goal of the system is to add player agency to the level generation so they can make decisions based on their current goals, instead of being entirely at the whim of RNG.