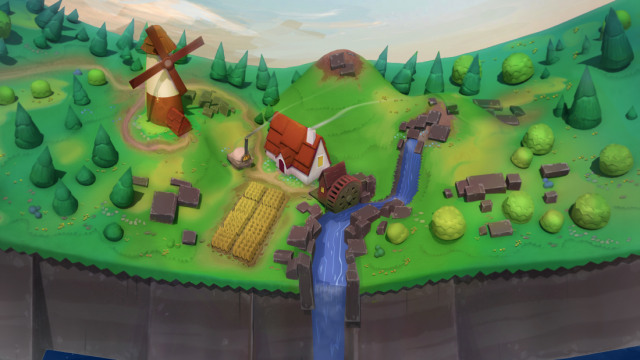 Grand Miracle is a seated virtual reality game about casting miracles to solve puzzles and grant wishes to the inhabitants of a ringworld floating around your head.

The Land Below has lost its celestial link to The Stars Above, resulting in the disappearance of natural elements. You’re a guardian spirit sent by the stars to fix the severed link. You can use the elements of fire, wind, and water to interact with and change the state of the environment. For example, a farmer’s crop fields have dried up, so you can cast the water miracle on the nearby stream bed to bring running water back to the farm. Solving puzzles cascades into new puzzles and wishes surfacing for the player to explore and fulfill.

As you grant wishes and solve puzzles with your miracles, you eventually uncover Star Puzzles in each section. These spatial puzzles require you to map 2D constellation pieces into a 3D star field, connecting the top and bottom stars and reforming the constellation. This reconnects the land to the stars and brings the ringworld one step closer to being fixed.

After you’ve discovered and reconnected all the constellations in an area, you can perform a Grand Miracle. Grand Miracles are a gesture-matching mini-game that acts as a finale for the narrative and thematic arc of the section you’re in, consisting of many miracles being cast and culminating in the region’s natural elements being restored. After a Grand Miracle has been performed, you can move on to a different section of the ring by rotating it in-place and discovering a new set of puzzles and troubles to overcome.

Here’s a video showing off the scale and perspective of the ringworld as well as a simple Star Puzzle: