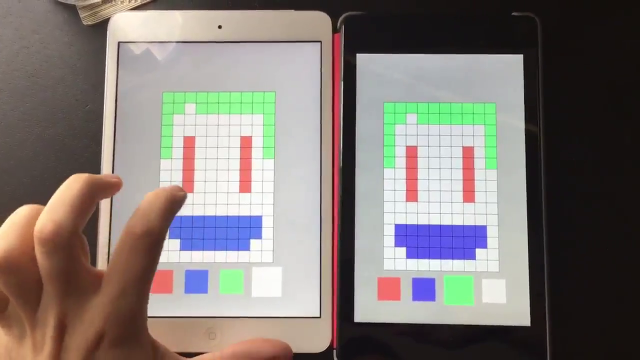 Inspired by my partner’s and my love for picross and our desire to play it together, Multi-Picross is an in-progress prototype of an online multiplayer color picross game.

Originally started in 2017 in Unity, I immediately focused on figuring out the networking component after basic coloring functionality so that it could be played cross-platform:

trying to shake off a bad mood, so here is a multiplayer cross-platform picross prototype i am working on (a late #ScreenshotSaturday) pic.twitter.com/l6qR5CV4DY

As hyper-instant realtime updates aren’t necessary, Firebase’s database SDK worked fantastically. The game board is effectively a shared JSON blob and each client receives updates as events. The video above has the build running on an iPad and an Android tablet.

I thought all my work was lost to hard drive failure until sometime in 2019 when I found an archived copy on a separate machine! I added more standard picross features like row and column clues as well as proper validation to hide the clue once it has been satisfied.

I’m currently focused on iteration on multiplayer design to test out what works “best”, such as hiding alternate sets of clues from each player so they can only solve part of the puzzle on their own.