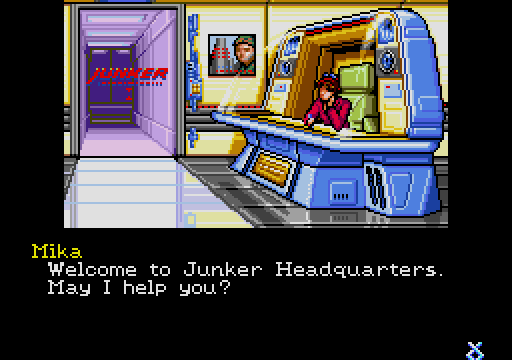 We were brainstorming a visual novel-like game to work on at Magnet Hill, and Hideo Kojima’s SNATCHER is one of my all-time favorite games, so I decided to rebuild the beginning environments in GameMaker Studio and the EdgeVN Visual Novel framework as a learning exercise.

I promise these screenshots are from my rebuild and not the actual game!

With a Sega CD emulator and the game’s disc on hand, I took many screenshots and audio recordings live from the game in order to rebuild the assets. I also found a tool that converts the game’s soundbank PCM files into WAVs. I even created the in-game font by hand, thanks to FontStruct (you can download it here).

All the letters and only a few additional glyphs are used in the game’s intro.

What I’ve built so far works near-flawlessly in GameMaker’s HTML5 build and I have high confidence in an achievable 1:1 experience. I’d like to wrap this up one day and throw it online for people to see. My personal goal here is to recreate the entire JUNKER HQ introduction environment, with the exception of the JORDAN computer and shooting range.

Konami, hit me up if you wanna pay me for a full-game rebuild. 😘